“The Pope Covered Up Priest’s Abuse of My Son” by Público (Madrid, Spain) by Ana Delicado, Buenos Aires Correspondent on May 3, 2013

The digital newspaper based in Madrid, Spain called Público published “The Pope Covered Up Priest’s Abuse of My Son” on May 3, 2013 by reporter Ana Delicado, Buenos Aires Correspondent.

Below this introduction is the translation into English by the liberal BishopAccountability.org which I think is faulty to some extent. Below it is the original Spanish version from the website called causabeatrizvarela.blogspot.com.

Here is one paragraph, that in my opinion, is faulty in the liberal BishopAccountability.org translation into English:

“"Bergoglio was aware of my complaint,"” she [Beatriz Varela] added.  'No one is given residence in a vicarage without the authorization of the Archbishop. Such is the commitment of Bergoglio, lip service or not,' she said."

"She went on: 'Faced with cases of pedophilia, the Church acts by covering up the abuses with hypocrisy, lies, and complicity.'"

This is the original Spanish version from causabeatrizvarela.blogspot.com:

The liberal BishopAccountability.org made one paragraph into two paragraphs and translated "arremete" which means attacks or lashes out" into "she said. [new paragraph] She went on."

A better translation is:

"Such is the commitment of Bergoglio, lip service or not,' he lashes out. 'Faced with cases of pedophilia, the Church acts by covering up the abuses with hypocrisy, lies, and complicity.'"

The liberal website version appears to minimize Bergoglio's blame in the cover-up and blame the Church separate from Bergoglio by making one paragraph into two paragraphs and using "she said. [new paragraph] She went on" instead of "he lashes out."

The liberal website translation appears to contradict or at least minimize, to some extent, the headline:

"The Pope Covered Up Priest's Abuse of My Son"."

Pray an Our Father for the restoration of the Church.

“The Pope Covered Up Priest’s Abuse of My Son”

Público (digital newspaper based in Madrid, Spain)
By Ana Delicado, Buenos Aires Correspondent
May 3, 2013
[Translated into English by BishopAccountability.org. Click below to see original article in Spanish.]
http://www.bishop-accountability.org/Argentina/news/2013_05_03_Delicado_The_Pope_PARDO_Spanish.pdf

Reprinted on May 4, 2013 in Edición UNCuyo, a digital publication of the Center for Information & Communication at Universidad Nacional de Cuyo
http://www.edicionuncuyo.com/novedades/index/el-papa-encubrio-al-cura-que-abuso-de-mi-hijo

The Argentine justice system, for the first time, rules that the Church acted as an accomplice in a pedophile case, and that it must pay compensatory damages to a mother and her son, who was violated by a priest.

For the protagonists, their story isn’t easy to narrate.  Beatriz Varela and her son, Gabriel, have had to wait nearly 11 years for the Argentine justice system, in an unprecedented verdict in this country, to hold the Catholic Church accountable for its role in acts of pedophilia committed by one of its priests against a 15-year-old boy.

This week, the Court of Appeals of Quilmes, a municipality in the province of Buenos Aires, confirmed the decision of a civil court, which in December ruled that the Office of the Bishop of Quilmes is obligated to pay compensatory damages of 155,600 pesos plus interest (23,000 euros) for psychotherapeutic treatment expenses and moral damages caused to the boy and his mother.

The crime occurred on August 15, 2002, when Varela invited priest Rubén Pardo, a vicar in the local parish, to her home to give her two sons instruction in Catholic precepts.

As published by journalist Mariana Carvajal in the Argentine newspaper Página/12, the priest, in his 50s, talked to Gabriel alone and, over dinner, asked his mother’s permission for her son to spend the night at Casa de Formación, Pardo’s place of residence, where they could continue Gabriel’s religious instruction, and so that he could assist Pardo in celebrating next day’s Mass.
Gabriel testified that Pardo invited him to sleep in his bed, which the boy interpreted as a paternal gesture. It was there that the priest sexually abused him.  “I knew he was violating me, but I didn’t know how to avoid it because I was very scared and in a state of shock,” he declared in court.  After Pardo fell asleep, Gabriel fled home in terror and confessed to his mother what had happened.

Soon after, Gabriel’s mother met with then-Bishop of Quilmes, Luis Stöckler.  “At first he was alarmed, but in the days to follow, [he] didn’t give me the impression that he’d take necessary action,” Varela told this newspaper.  The bishop “attempted to minimize the incident, telling me to show mercy to those who’ve taken a vocational vow of celibacy, as they have moments of weakness.”

She told the bishop that she’d come to him because she wanted “truth, justice, and for no others to go through [what her son had],” at which point the prelate began to pressure her for “the paychecks.” "At the time, I worked at a school in the diocese," she explained.

Varela then presented her case to the ecclesiastical court, “whose presiding authority refused to hear my complaint,” and where two weeks later she was interviewed by four priests “who subjected me to a humiliating interrogation, with wanton and tendentious questions, pinning me as the assailant and expressing the certainty that, within 96 hours of the incident, he [Pardo] had confessed to his bishop, who admonished him.”

Varela also went to the Metropolitan Curia, the residence of former Archbishop of Buenos Aires, Jorge Bergoglio, better known today as Pope Francisco, and where she was escorted off the premises by security personnel.

At the Cathedral adjacent to the Curia, she learned that the pedophile priest had been assigned to a residence at the vicarage in the neighborhood of Flores.  The house [where Pardo was assigned] belonged to the Office of the Archbishop of Buenos Aires, at the time presided over by the current pope of the Catholic Church and commander-in-chief of the Vatican.

“Bergoglio was aware of my complaint,” she added.  “No one is given residence in a vicarage without the authorization of the Archbishop. Such is the commitment of Bergoglio, lip service or not,” she said.

She went on: “Faced with cases of pedophilia, the Church acts by covering up the abuses with hypocrisy, lies, and complicity, and without a commitment to God or society.  Everyone knows and everyone remains silent, so they’re all accomplices.  What is more, it [the Church] is an institution revered by society.  The Church laughs in face of society and is satisfied that the Argentine people are under the spell of their scepter,” she said.

Varela regrets the trust she placed in the Church.  “The priests are trained to give Masses for the manipulation of minds,” she said.  “I hope society becomes aware of the fact that belief in God doesn’t suffice to register one’s name in the book of any religion, and less so in a religion supported by the State.”

The abused girl’s mother, who wished to not disclose the specifics of the case, had filed seven months ago a criminal complaint against the priests, but the two men to this day work at the school.  “This is a pedophile ring, as the teacher is no stranger to the fact that three or four girls disappear from recess and reappear later on.  It’s a deliberate cover up,” said Varela.

The judicial process that Varela and her son have passed through hasn’t been an easy road.  Although pleased with the verdict, she believes that justice came too late.  “When the priest who abused my son died [of AIDS, in 2005], the criminal case files disappeared for two years.  We were close to the statute of limitations, and my son attempted suicide and was treated for a month and a half at a psychiatric ward.  No amount of money will compensate for all that we’ve suffered.”

In contrast to the mother [of the 4-year-old girl] in Córdoba, Varela agreed to talk about what she and her son have endured.  “Stöckler [who still serves as Bishop Emeritus of Quilmes] attempted to silence me, but I told him: ‘My silence is for when I’m dead.  My son has already suffered.  No other boy will suffer the same because of my silence.’”

Like his mother, Gabriel, now 25 years of age, consented to the public dissemination of his case.  “The court ruling sets a legal precedent and can help other victims so that their quest for justice isn’t so laborious,” he said.  “We're talking about an institution that is extremely powerful.”

He speaks from the first-hand experience he suffered in the flesh.  “I had nightmares, I couldn’t sleep.  At the time, I had feelings of guilt about what had happened, what with the Church telling my mom that she was the instigator, and that I’d provoked this individual [Pardo] to do what he did.”

One of the most difficult moments was when the criminal case files went missing.  “I felt we had lost, that so many years of struggle and exhaustion were all in vain,” he said.

With psychological support, and through the efforts of his mother and siblings, Gabriel ultimately succeeded in pushing forward and arriving at the understanding that nothing that had happened was his fault, that “you can’t be held responsible for the perversion of another, you’re simply a victim.”

He believes it isn’t acceptable to stay in the role of victim.  “There are many who don’t report the abuse out of fear or embarrassment of what other might say about someone who condemns an individual who wears the insignia [of the Church].  But you must take action.”

Gabriel no longer self-identifies as Catholic and is trying to formally abandon his ties to the religion.  “Any decision made by the Church represents you as a faithful member of their institution.  The Constitution states that the State is under the obligation to subsidize the creed that has a majority.  With my desertion, the Catholic institution will diminish in power,” he concluded.[http://www.bishopaccountability.org/Argentina/news/2013_05_03_Delicado_The_Pope.htm] 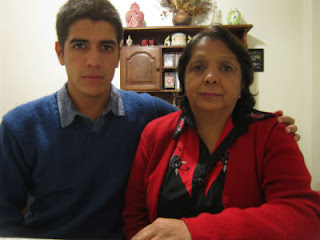